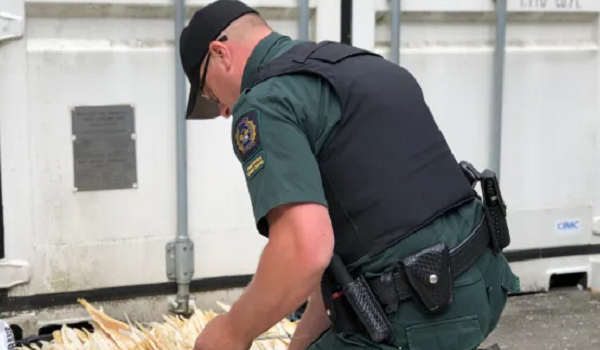 Environment and Climate Change Canada is responding to online reports it says are falsely accusing the ministry of recruiting officers to police climate change.

“We are aware of some misleading reports on social media suggesting that we are creating a new enforcement function,” the ministry wrote in a series of tweets on Thursday.

“This is false and the record needs to be set straight.”

The tweets also addressed claims about a replacement facility for environmental enforcement officers in Winnipeg.

According to an article published more than a week ago by The Counter Signal, a far-right publication, the “new” office will feature a firearms “armoury,” interrogation rooms, “biological labs” and “controlled quiet” rooms.

The ministry said in its tweets that the floor plans shared on social media are real and the office is in the process of moving to a new location in Winnipeg.

“But the way the facility is being described is completely false,” the ministry said. “Our enforcement officers are professional, dedicated and highly-trained, and we are proud of the work they do each day to protect Canada’s environment, wildlife and habitats.”

The floor plans were shared publicly in July 2021 as part of a contracting process seeking renovation services, the ministry said in an email statement to CBC News.66

The article alleged the ministry’s job ad on indeed.com seeks to recruit “a battalion of climate ‘pollution’ officers.”

The ad states the ministry’s enforcement branch ensures compliance with several laws which seek to protect the natural environment and its biodiversity.

“Our enforcement responsibilities cover more than 60 regulations,” the ministry added in its statement.

In 2015, for instance, the ministry fined a Windsor, Ont., construction company $7,500 for destroying bank swallow nests and eggs after an inspection by an environmental enforcement officer.

The enforcement branch dates back to 2008, recruits regularly and is in the process of hiring new officers to maintain its existing workforce, the ministry said in its tweets.

“Our officers enforce many pieces of federal environmental legislation that prevent pollution and protect Canada’s wildlife and biodiversity,” the ministry said in one of its tweets.

“They are not climate change enforcement officers. Our environmental officers spend most of their time enforcing legislation and regulations that prevent pollution such as the pollution prevention provisions of the Fisheries Act.”

According to the ad, enforcement officers are required to wear uniforms and carry officer safety equipment, such as body armour, handcuffs, batons and prohibited weapons such as pepper spray.

Four days after the article appeared, in an Aug. 27 tweet linking back to the job ad, one of the seven people vying to become the new leader of Alberta’s United Conservative Party (UCP) accused Trudeau of hiring “Climate Change Enforcement Officers.”

“As premier, we will not permit any federal climate cops to operate in Alberta by virtue of the Alberta Sovereignty Act,” Danielle Smith said.

Smith was referring to her flagship campaign proposal, which she claims would give Alberta the power to refuse to enforce federal laws and policies not deemed to be in the province’s interests.

Smith’s tweet included a fake ad for “Justin Trudeau’s Climate Police” featuring a picture of the bumbling lead character from Paul Blart: Mall Cop and a list of job perks that include “handcuffs, batons and weapons.”

“WEF” appears to be a reference to the World Economic Forum, an international non-governmental lobby group that has been the subject of widespread political conspiracy theories. Smith’s campaign team did not clarify whether the reference to “Greta” was meant to indicate Swedish environmental activist Greta Thunberg.

CBC News also asked Smith’s campaign team if she had any reaction to the ministry’s tweets.

“As Danielle has said repeatedly, she will work collaboratively with caucus to ensure the Sovereignty Act is drafted in accordance with sound constitutional language and principles,” a campaign spokesperson said.

Environment and Climate Change Canada did not confirm that its tweets about “misleading reports” were referring to the Counter Signal article and Smith’s tweet.

After the final UCP leadership debate on Tuesday, Smith again suggested the ministry is “hiring enforcement officers with weapons to enforce [rules against pollution].”

While some wildlife officers may carry licensed shotguns as protection against predatory animals, environment officers are not armed “in any situation,” he said.

Firearm storage areas like the one shown in the blueprint are needed “should they ever need to detain or confiscate weapons if they’re encountering hunters or someone conducting illegal activity,” the official said.

The laboratories are needed for dissections of wild fowl, he added.

“These are the kinds of facilities that exist across the country already,” he said. “There’s dozens of them. They have existed for a long time.”

“There are also areas for secure storage for samples. Some offices have small closed ‘quiet rooms’ used for work that requires a high degree of concentration and where officers can work without interruption.”

The article went on to link the “climate police armoury” to an incident last month in which, according to the ministry, water scientists taking samples near a highway in Saskatchewan were told by a landowner they were in fact on private land.

The article also said the federal government intends to “reduce the use of fertilizer on Canadian farms,” a claim previously made by conservative pundits and politicians.

This is not what the government has said it intends to do. While Ottawa has pledged to reduce emissions from fertilizers by 30 per cent, it has also pledged to meet that goal without resorting to a mandatory reduction in nitrogen fertilizer use.

Ahmed Al-Rawi, an assistant professor at Simon Fraser University who studies online extremist movements, said the article took one fact — the plans for a newly located enforcement office — and “from there [proceeded] with a lot of … imagination to build up a whole narrative around a so-called secret plan to control people or to harm people.”

“This is how conspiracy theories are actually manufactured,” he said.