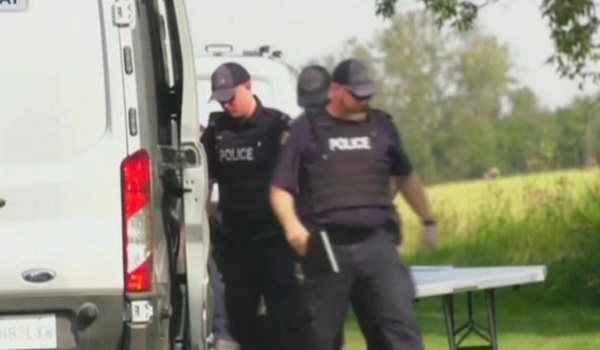 In a shocking conclusion to four days of terror on the Prairies, Myles Sanderson, the final suspect in a deadly stabbing rampage, is dead after being taken into custody, Saskatchewan RCMP confirmed Wednesday night.

Sanderson, the subject of a four-day hunt for his role in killings that left 11 dead, had been taken into police custody at roughly 3:30 p.m. local time on Wednesday on the side of a highway near Rosthern, Sask., roughly an hour southwest of where the crimes occurred. He died shortly thereafter, RCMP Assistant Commissioner Rhonda Blackmore said. Multiple media have reported that the wounds were self-inflicted.

“Shortly after his arrest he went into medical distress,” she told media late Wednesday. He was taken to hospital, where he was pronounced dead.

“We have questions,” Mendicino said in response to reporter questions late Wednesday.

“That’s why there has been an independent investigation, which has been commenced at the request of the RCMP, to be conducted by Saskatoon police as well as another incident response group out of Saskatchewan.”

That investigation is ongoing, the public safety minister said.

Sanderson’s death was first reported, that he died from self-inflicted injuries, which the RCMP did not confirm.

Multiple law enforcement sources showed that police used a “pursuit intervention technique” — ramming Sanderson’s vehicle on one side and causing it to spin off the highway.

Speaking to reporters Wednesday night, Saskatchewan RCMP Commanding Officer Rhonda Blackmore said the vehicle was “directed off the road and into a nearby ditch” where officers were able to identify Sanderson as the driver. A knife was found inside the vehicle after he was taken into custody.

“Shortly after his arrest, he went into medical distress,” Blackmore said, and “all lifesaving measures that we’re capable of were taken,” including CPR. He was taken by ambulance to a hospital in Saskatoon where he was pronounced dead, she added.

The results of a forthcoming autopsy will not be released, RCMP said, citing the ongoing investigation.

“There are a number of ongoing investigations, both into the circumstances surrounding Mr. Sanderson’s death, as well as the stabbings that occurred in the James Smith Cree Nation,” Mendicino said on Wednesday.

“Obviously, there will continue to be questions … about the circumstances involving the death of Myles Sanderson.”

The hope, Mendicino said, is to “obtain a measure of transparency about the circumstances.”

“But right now, the priority is the family,” he added.

The Saskatchewan Health Authority noted Wednesday that 10 people were still in the hospital with injuries, two in critical condition.

The RCMP also released the names of the victims of the stabbings on Wednesday. Among them, are a 77-year-old widower, a first responder, and a woman described by her brother as “a true matriarch.”

Ivor Burns and Darryl Burns from the James Smith Cree Nation told Reuters that their sister, Gloria, was among the dead.

“She devoted her life to helping people. She grew up in this community, and she had battled with addiction. She battled with a whole bunch of issues in her life before she started working in the field,” Darryl said.

Ivor said the massacre was “unreal.”

“It’s something that is hard to comprehend because we’re kind of a small people. We’re stuck on the same little piece of land … and we all live close together.”

Saskatoon Tribal Council Chief Mark Arcand lost his sister and nephew in the attacks. After Sanderson’s arrest — before news of his death broke — he said “people can start to feel safe again.”

“But also now is the time for healing to begin,” he said.

Blackmore said Wednesday she hoped families could “rest easy tonight knowing Myles Sanderson is no longer a threat to them,” but acknowledged the survivors had “a very long and extensive” healing process.

As for the motive, she said the deaths of both Myles and Damien, who she said is still considered a suspect in the attacks, means those answers may never be found.

“His motivation may, at this time and forever, may only be known to Myles,” she said.

Investigations into both the circumstances of Sanderson’s death and the mass stabbings are ongoing.