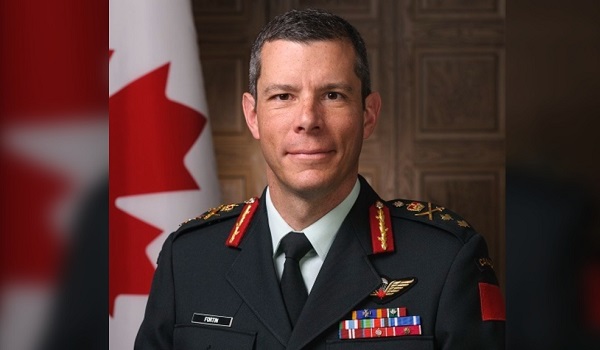 Maj.-Gen. Dany Fortin was found not guilty of sexual assault Monday, a verdict he called an “important step” in regaining his career and reputation.

The former head of Canada’s COVID-19 vaccine rollout had been charged in relation to an incident that allegedly occurred in 1988 while he was a student at Royal Military College Saint-Jean in Quebec.

He was removed as head of the rollout in May 2021 amid the investigation into the allegation. He had pleaded not guilty.

“I am so relieved by the judge’s decision today,” an emotional Fortin told reporters at the courthouse in Gatineau, Que. “As you would expect, this is a huge burden off our shoulders — my shoulders and that of my family. This is one important step in an ongoing process to prove my innocence and recover my reputation.”

Justice Richard Meredith said he believes the complainant was sexually assaulted, but said the Crown did not establish beyond a reasonable doubt that it was Maj.-Gen. Fortin who had assaulted her.

Shortly after the verdict Monday, he claimed to be the victim of political interference and told reporters he wants the military to restore him to an equivalent position.

Fortin reiterated his previous claim that senior government and military officials mishandled his case, details of which were leaked to the media before he even found out about them.

“From the start, senior military leaders and political decision-makers presumed and acted as if I was guilty,” he said. “I did not do what I was accused of. I did not. I’m not guilty and I’m innocent.”

The complainant, who cannot be identified due to a publication ban, was also a student at the time, and she and Fortin were acquaintances. She brought forward her allegation last year amid a sexual misconduct crisis in the Canadian Armed Forces, in which current and former senior leaders were facing investigations.

“I’m embarrassed, I’m ashamed, I’m in shock,” she testified. “I’m horrified, I’m horrified. I don’t want anybody running in and finding me in that position, somebody doing that to me, demeaning me.”

Fortin testified in his own defence, denying the assault. “I never entered the room of (the complainant),” he said on the stand.

In delivering his verdict Monday afternoon, Quebec court Judge Richard Meredith said he had no doubt the complainant was sexually assaulted, but had a reasonable doubt as to whether Fortin was the attacker.

He said there were several “important contradictions” between what the complainant told the court and what she told police, which impacted her reliability and credibility as a witness when it came to her identification of Fortin.

Defence lawyer Isabel Schurman had highlighted a number of inconsistencies during cross-examination of the complainant that Meredith mentioned in his ruling.

“While it can be normal to not remember all the details of such an incident, the difficulty here is that the complainant described with precision to investigators certain acts that the accused had committed” which she then did not mention in her examination-in-chief by the prosecution in court, Meredith said.

He said it’s possible that some of the contradictions can be the result of nervousness and anxiety, as the complainant had explained in court.

“However, at the very least it raises questions about the reliability of her memory of the events, and on the possibility that she exaggerated important elements of her version to police,” Meredith said.

Despite the other contradictions, the complainant remained adamant throughout her testimony that Fortin was her attacker.

“I looked at him. I knew that man. I spent 18 months with him being around day in and day out, and so there may be some slight variances, but there are no variances in that,” she said on the stand in September.

Meredith also found those comments comprised a “certain exaggeration,” saying the evidence showed the contrary: they weren’t in the same classes, had different friends, weren’t dating, and didn’t participate in social activities together.

He noted that the description of her attacker — a fit young man with short dark hair — could match plenty of male students at the college in the 1980s. And the location of the attack was not “exclusively accessible to the accused,” as the doors in the barracks were kept unlocked.

“The complainant testified with emotion in explaining what led her to report so many years later, and the court has no doubt as to her sincerity in this regard, and sympathizes with her considering the suffering she has lived through,” Meredith said.

“However, the court’s ruling cannot be based on sympathy.”

Crown prosecutor Diane Legault said the verdict was a disappointment and she was not sure whether the Crown would appeal it.

Fortin has launched a separate court case against the federal government over his removal. That case in the Federal Court of Appeal remains ongoing.

While he remains on the payroll of the Canadian Armed Forces, he says he has not been given an actual job since May 2021, and is demanding a position commensurate with his rank.

“I’m proud to serve,” Fortin told reporters Monday. “But I’ll tell you, I’d be interested to know what the minister, what the chief of the defence staff, what the vice-chief, think of this prospect in light of today’s decision.”

Defence Minister Anita Anand did not mention Fortin in a brief statement to the Star, saying the government will continue to address sexual misconduct in the military “and to select senior leaders whose conduct is beyond reproach.”

The Department of National Defence said it will “consider the implications of the judge’s finding as it applies to our responsibilities and accountabilities going forward.”

Fortin previously wore his uniform and medals throughout the civilian court proceeding, but the Canadian Armed Forces implemented a new policy on Dec. 1 barring members from wearing their uniforms to civilian court unless appearing on behalf of the military. Members are also prohibited from wearing medals to court under any circumstance.

The new policy was brought in after advocates criticized Fortin’s decision to wear the uniform and medals, saying it created a power imbalance between himself and the complainant.