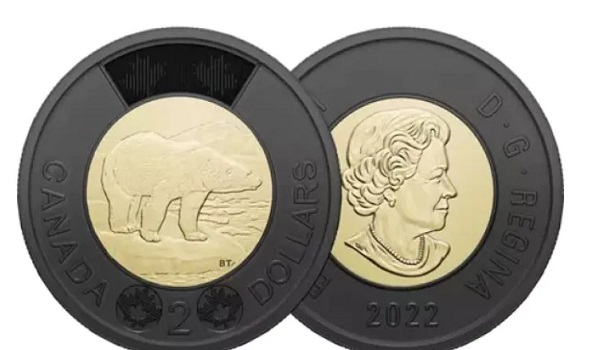 The Royal Canadian Mint has released a new $2 coin to mark the passing of Canada’s recently deceased head of state, Queen Elizabeth.

The coin, which the mint unveiled on Wednesday, will be similar to the existing toonie coins, with the familiar polar bear design in the middle and an image of the Queen on the obverse side, but instead of the silver exterior around a gold circle in the middle, the exterior will be black nickel.

“Like a mourning band, the black outer ring surrounds the polar bear design at the centre of the coin’s reverse,” the mint said.

The Queen died in September after more than seven decades on the throne. Nearly five million of the coins will go into circulation this month and will begin appearing gradually as banks restock their $2 coin inventories.

“Queen Elizabeth II served as Canada’s head of state for seven decades and for millions of Canadians, she was the only monarch they had ever known,” said Marie Lemay, president and CEO of the Royal Canadian Mint. “Our special $2 circulation coin offers Canadians a way to remember her.”

The mint is also hosting public coin exchanges at its Ottawa and Winnipeg boutiques on Wednesday and Thursday.

An Ontario energy company to issue...