New York US Open: Another moment of glory – Serena Williams wins Round 1 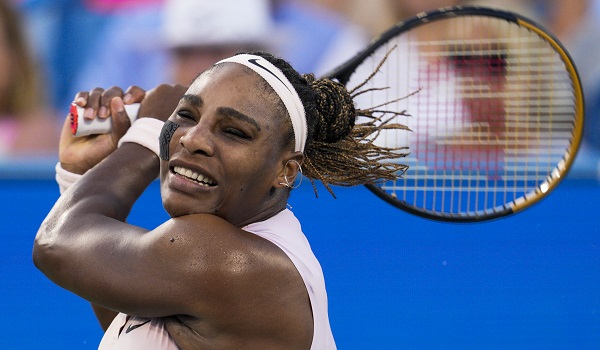 New York US Open: Another moment of glory – Serena Williams wins Round 1

With sparkles in Serena’s hair and glimmering flashes of what was — quite perfectly — as much cocktail dress as tennis outfit, Serena Williams was serving for the set but down at deuce.

The US Open crowd was amped but nervous. Serena was a 23-time major champion. Her opponent, Danka Kovinic, was a 27-year-old who had never been past the third round in a major. Back in the day, this would have taken about 53 minutes.

Serena is 40 now, though, mother to a 4-year-old daughter. She’s been injured. She barely plays anymore. She is set to retire.

As such, the entire night of this first-round match felt like a tightrope act, roaring applause amidst lingering anxiety, fear of a collapse that would bring the end while trying to appreciate the present and cheer in the moment.

That’s when she blasted two serves right past Kovinic and took the first set the way she did en route to winning six singles championships here.

The Queen of Queens would have another victory at Arthur Ashe Stadium, named after the pioneer that had inspired her family to believe it could climb improbably off public courts on a street corner in Compton to global superstardom.

She beat Kovinic in straight sets (6-3, 6-3) to set off a celebration that was a career in the making.

How long Williams lasts in this, her final tournament, is anyone’s guess? She will face second-seed Anett Kontaveit Wednesday, at least extending her single’s career a couple of days. (She is also entered in the doubles with older sister Venus). The crowds, no doubt, will return to support her.

There are moments she can play as well as ever. There are moments she doesn’t even waste energy sprinting after shots. Time is undefeated and Serena, who first dazzled in Flushing Meadows in 1999 when she won the US Open as a 17-year-old with beads in her hair, is up against it.

No matter. This isn’t about winning another major — at least not for the fans. This is about one more. One more night where she was the main event. One more impossible volley that inspired imaginations. One more victory they could pour cheers down onto her.

This was a celebrity-rich grandstand where tickets on the secondary market were hitting over $5,000 a pop. A long ceremony was held after the match. This was New York, the US Open at its biggest and brightest and boldest, just the way Serena always craved it.

Back in the beginning, back during breaks in training on the dual tennis courts of East Rancho Dominguez Park, Richard Williams used to dare his daughters to dream.

They were not, he would say, in the middle of Compton, surrounded by a pawn shop, a used car lot and a weed-strewn field. They were wherever their minds could take them.

Imagine this serve is for a major tennis championship, Richard would say. Which one do you want to win most, he would ask.

Venus Williams would always say Wimbledon, the oldest of the majors played outside London and known for its pristine white uniforms and crisp grass courts and royals in the box. It felt sophisticated.

Serena saw it completely differently. She wanted the speed of hard courts, the heat and humidity of August, the rowdiness of the fans, the action of the city. She wanted the wild tournament, the American Tournament.

She is a global icon, of course, but an American one first. A force of nature and personality for more than her undetectable, yet vicious, serve. It is the way she carries herself, unapologetically proud in every way, for African Americans, for women, for mothers, for little sisters, for anyone who just loves watching the competitive heart of a champion.

She sent generations of talent packing, overpowering and then outlasting them all. She won the 2017 Australian Open while in the early stages of a pregnancy. She returned after the birth of her daughter, Alexis Olympia, and managed to make the finals in four more majors, including twice in New York.

And here, on what otherwise would have been just another opening round match, just another night at the Open, she thrilled once again. In the pressure moments she was her old, glorious self playing to those old, deafening cheers.

Every time she steps on court in New York will be treated as if it might be the last time. Even her practice sessions have been attended by throngs of fans in the days prior to the tournament’s start.

It will be only the fifth singles match for Williams over the past 12 months, because the American was off the tour from a first-round injury at Wimbledon last year until a first-round loss there this year. Since returning from that hiatus, Williams is 1-3, including straight-set defeats against Tokyo Olympics gold medalist Belinda Bencic and 2021 U.S. Open champion Emma Raducanu in her two most recent outings.

Toronto has the most expensive mon...

Federal spends $2B to create affor...