No survivors found so far after Nepal plane’s crash 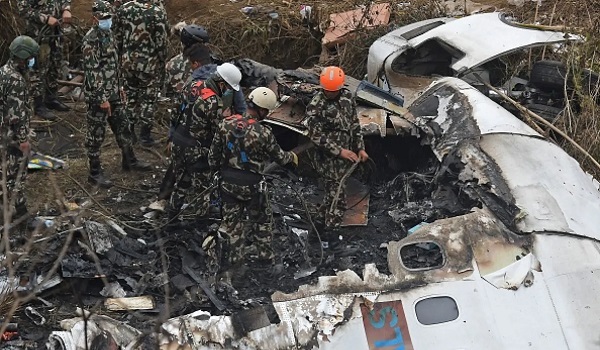 No survivors found so far after Nepal plane’s crash

Yeti Airlines flight 691 crashed Sunday just before landing in Nepal’s tourist city of Pokhara, the gateway to a popular hiking area Annapurna Circuit, in the Himalayas, after a 27-minute trip from Kathmandu. It plummeted into a gorge on approach to a new airport in the foothills of the Himalayas, officials said, as investigators looked for the cause of Nepal’s deadliest plane crash in 30 years.

At least 69 of the 72 people aboard have been confirmed dead, and officials believe the three missing are also dead. Rescuers combed through the debris, scattered down a 300-meter-deep (984-foot-deep) gorge.

A pharmaceutical marketing agent was traveling to be with his sister as she gave birth, and a minister of a Korean religious group was visiting the school he founded.

On Monday evening, relatives and friends were still gathered outside a local hospital. Many consoled one another, while some shouted at officials to speed up the post mortems so they could take the bodies of their loved ones home for funerals.

Nepal’s Civil Aviation Authority said the aircraft last made contact with the airport, which began operations only two weeks ago, from near Seti Gorge before crashing.

A witness who recorded footage of the plane’s descent said it looked like a normal landing until the plane suddenly veered to the left.

“I saw that, and I was shocked,” said Diwas Bohora. “I thought that today everything will be finished here after it crashes, I will also be dead.”

After it crashed, red flames erupted and the ground shook violently, Bohora said. “Seeing that scene, I was scared,” he added.

Amit Singh, an experienced pilot and founder of India’s Safety Matters Foundation, said Bohora’s video appears to show a stall, a situation in which a plane loses lift, especially likely at low airspeeds.

The twin-engine ATR 72 aircraft, operated by Nepal’s Yeti Airlines, was completing the 27-minute flight from the capital, Kathmandu, to Pokhara, 200 kilometers (125 miles) west. It was carrying 68 passengers, including 15 foreign nationals, as well as four crew members, Nepal’s Civil Aviation Authority said in a statement. The foreigners included five Indians, four Russians, two South Koreans, and one each from Ireland, Australia, Argentina and France.

Pilots say Nepal can be a challenging place to fly, but conditions at the time of the crash were good, with low wind, clear skies and temperatures well above freezing. So what might have caused the crash of the ATR 72 aircraft?

THE PLANE OUT OF CONTROL?
A dramatic video shot on a smartphone from the ground shows the last moments before the plane crashed in a gorge about 1.6 kilometers (a mile) from newly opened Pokhara International Airport. The aircraft’s nose is noticeably high before the left wing suddenly drops and the plane falls out of sight of the video, indicating a likely stall, said Amit Singh, an experienced pilot and founder of India’s Safety Matters Foundation.

“If you see the trajectory of the aircraft, the aircraft’s nose goes up, and the nose up would be associated with a reduction in speed,” he told The Associated Press. “When they have stalls, typically one wing goes down and wings are basically generating the lift. So as the air flow reduces, the lift generated is not enough to sustain the aircraft in flight and the wing drops and the aircraft nosedives.”

Professor Ron Bartsch, an aviation safety expert and founder of Australia’s Avlaw Aviation Consulting, told Sydney’s Channel 9 that he also thought the plane appears to have gone into a stall. Its proximity to the ground possibly made it look to the pilots like their speed was greater than it was, he said.

“I’d suggest that the aircraft has entered into an aerodynamic stall,” he said after reviewing the video just before the crash. “Possibly pilot error.”

Yeti Airlines spokesman Pemba Sherpa said the cause of the crash was under investigation.

QUESTIONS ABOUT THE AIRCRAFT
The ATR-72 was introduced in the late 1980s as a French and Italian joint venture and even though it has been involved in several deadly accidents over the years, several due to icing issues, it generally has a “very good track record,” Bartsch said.

Searchers recovered the flight data recorder and cockpit voice recorder on Monday from the scene of the crash, but it will not be until they are analyzed carefully that investigators know for sure what happened.

“Human factors will be an element that the investigators will have a look at to see whether or not there’s been proper training,” Bartsch said. “But normally aircraft don’t just fall out of the sky, particularly modern aircraft.”

It is possible that some sort of technical failure with the aircraft’s instruments gave bad data to the pilots, but even then it is possible to recover from a stall, Singh said.

“The pilots should be trained to handle technical failures,” he said.

Singh noted that Nepal’s aviation industry has a poor track record for safety and training despite its “challenging airports and conditions.” Even though it has been improving, he noted its planes are banned from flying into European airspace.

A pilot who routinely flies an ATR-72-500 plane from India to Nepal said the region’s topography, with its mountain peaks and narrow valleys, raises the risk of accidents and sometimes requires pilots to fly by sight rather than relying on instruments.

The pilot, who works for a private Indian airline and didn’t want to be identified due to company policy, called ATR-72-500 an “unforgiving aircraft” if the pilot isn’t highly skilled and familiar with the region’s terrain and wind speed.

ATR said Sunday on Twitter that its specialists were “fully engaged to support both the investigation and the customer” and that its “first thoughts are with all the individuals affected by this.”

The company did not immediately respond to requests for further comment.

CONCERNS ABOUT THE NEW AIRPORT
Home to eight of the world’s 14 highest mountains, Nepal has a history of air crashes. According to the Safety Matters Foundation’s data, there have been 42 fatal plane crashes in Nepal since 1946.

The country’s “hostile topography” and “diverse weather patterns” were the major challenges, according to a 2019 safety report from Nepal’s Civil Aviation Authority, also resulting in a “number of accidents” to small aircraft. The report said such accidents happened at airports that had short strips of runway for takeoff and landing and most were due to pilot error.

The airport in Pokhara, a popular tourist destination as the gateway to the Annapurna mountain range, sits at an elevation of some 820 meters (2,700 feet).

Ahead of the airport’s opening two weeks ago, some had expressed concern that the number of birds in the area — due to the habitat provided by two rivers as well as a landfill near the airport — could make it additionally hazardous.

At the airport’s official opening, the city’s mayor said work to mitigate the effect of the landfill had been completed, according to local media reports, but it was not clear specifically what measures were undertaken.

If the aircraft had suffered a bird strike as it was coming in to land, it is possible this would have prompted the pilots to discontinue their approach and go around again, which also could have led to a stall, Singh said.

“A high thrust setting can lead to a stall,” he said. “Go-arounds are most often mishandled by crew … so again the issue is, how did the pilot cope with the failure?”

CO-PILOT WAS WIDOW OF PILOT KILLED IN 2006 CRASH
In 2010, Anju Khatiwada joined Nepal’s Yeti Airlines, following in the footsteps of her husband, a pilot who had died in a crash four years earlier when a small passenger plane he was flying for the domestic carrier went down minutes before landing.

A pilot with more than 6,400 hours of flying time, Khatiwada had previously flown the popular tourist route from the capital, Kathmandu, to the country’s second-largest city, Pokhara, Bartaula said.

The body of Kamal K.C., the captain of the flight, who had more than 21,900 hours of flight time, has been recovered and identified.

Kathiwada’s remains have not been identified but she is feared dead, Bartaula said.

“On Sunday, she was flying the plane with an instructor pilot, which is the standard procedure of the airline,” said a Yeti Airlines official, who knew Khatiwada personally.

“She was always ready to take up any duty and had flown to Pokhara earlier,” said the official, who asked not to be named because he isn’t authorized to speak to media.

China population drops for the fir...