Trending News
HomeNews1Not all Ontario school boards have teacher dress codes. Some of the students not pleased about it

Not all Ontario school boards have teacher dress codes. Some of the students not pleased about it 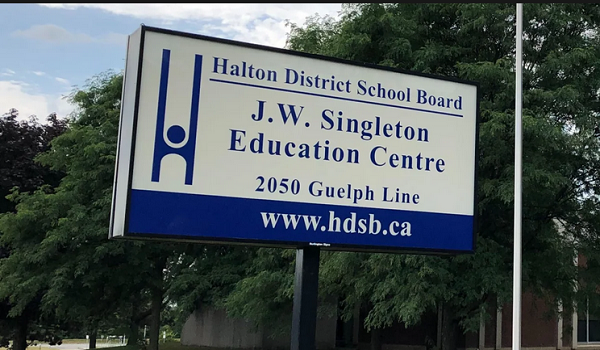 Not all Ontario school boards have teacher dress codes. Some of the students not pleased about it

Students say it’s unfair that they must abide by dress codes when few Ontario school boards have any such rules for teachers.

The issue is one teens in Halton have been talking about after video of a trans teacher at Oakville Trafalgar High School went viral, showing her in shop class wearing oversized prosthetic breasts with protruding nipples under tight, revealing shirts.

The ensuing controversy — which has made headlines around the globe — has seen the school targetted by protesters, and some staff have been threatened. Police are now stationed onsite daily.

Ambica Randhawa, a Grade 10 student at the school, isn’t bothered by the teacher’s appearance but would like to see some rules in place — ones that respect all staff and students.

“I’m personally not too disturbed by it — maybe because I don’t have any of her classes — but I do think that the dress code policy does need to be enforced for both the teachers and the students.”

She’s not sure if the dress code should be the same for teens and teachers, but believes “there’s a way that you need to dress in a learning environment.”

“I think that everybody has the right to express themselves as they are… but in the learning environment you need to make sure that everybody is comfortable there.”

A Grade 12 Oakville Trafalgar student, who’s not in any shop classes but sees the teacher in the hallways, said her peers are “quite divided” on the controversy, with some “very defensive of the teacher and her choices,” labelling anyone who’s critical as transphobic, while others say it has nothing to do with gender expression, but believe it’s an “inappropriate way of dressing,” particularly in shop class, where the large prosthetic breasts could be a hazard.

“If you’re going to have students follow a dress code, then it’s also important for staff to follow the same dress code, especially if a breach of that dress code could make students feel uncomfortable,” said the student, who asked not to be named.

Education Minister Stephen Lecce has asked the Ontario College of Teachers to review and “consider strengthening” professional standards. The Halton board, which has a special meeting Wednesday night, is expected to address more general dress code issues after trustees asked for a report.

The College of Teachers review is expected to include some discussion of a standard dress code or expectations or a tightening of ethical standards, which currently state teachers must “uphold the honour and dignity of the teaching profession.”

Halton education director Curtis Ennis has said the board “continues to handle this matter in a way that stays true to our values and commitment to human rights, respects the privacy and dignity of our students and staff, and with the safety and well-being of students and staff as our highest priority.”

At a Sept. 21 board meeting, Trustee Tracey Ehl Harrison proposed a motion calling on the director to return to the board by the end of November with “a report addressing the various considerations regarding dress codes.” It passed unanimously.

A survey of boards across the province found that most do not have staff dress codes, including the Toronto Catholic board and Toronto District School Board — the largest in the country — and nor do smaller boards like Upper Grand in the Guelph area.

The Waterloo Region District School Board does have one, and a spokesperson said there have been no violations that escalated. However, “school administrators may have dealt with minor issues,” said Eusis Dougan-McKenzie.

The Waterloo policy, which came into force in 2001 and was reviewed in 2020, states “it is the expectation … that staff will dress in a manner consistent with their roles and responsibilities with the board. The specific standard will be established by the supervisor in consultation with the staff.”

The Dufferin-Peel Catholic board does not have a teacher dress code, but the Peel public board says such matters fall under its more general code of conduct.

Halton board Chair Margo Shuttleworth said the teacher controversy at Oakville Trafalgar is a staffing issue and does not fall under the purview of trustees.

However, she added, trustees have received the bulk of calls of concern about it, and it is their job to “bring the voice of the community to the director.”

RBC: Ontario must spend a lot on r...