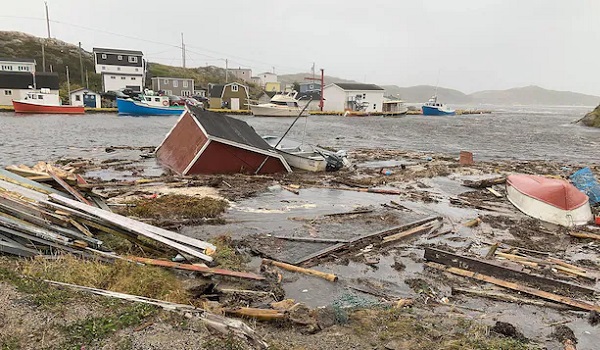 On Monday, Prime Minister Justin Trudeau says he will be visiting the regions in Atlantic Canada impacted by Fiona “as soon as possible this week.”

While indicating a desire to not interfere with any of the emergency response efforts on the ground, PM Trudeau said he wants all people in eastern Canada “to know that we are here for you.”

Offering assistance in the immediate aftermath over the weekend, the federal government is pledging to provide disaster funding where needed, and over the next few weeks will be matching any Fiona relief donations made to the Red Cross, which is on the ground assisting with interim housing, clothing, food, and essential supply needs.

Fiona hit Atlantic Canada on Friday night into Saturday, causing widespread power outages, washing out roads and downing trees. As of 4 p.m. on Monday, there were still more than 170,000 customers without power.

Some of the hardest hit areas in the province were on Cape Breton Island. Local states of emergencies were declared in Cape Breton Regional Municipality (CBRM) and Victoria County on the island.

“This is an unimaginable time for our province,” said Houston in a Monday afternoon briefing.

“The main priorities are power restoration, wellness checks and getting people back into their homes.”

Houston said he encourages Nova Scotians to check on their friends and neighbours, and alert local authorities if they are worried about someone they haven’t heard from.

Houston visited Cape Breton Island on Sunday where some of the most severe damage was sustained.

The Disaster Relief Assistant Funding will cover certain uninsured losses up to $200,000, with no deductible for residents and small business owners. Applications are available online or at MLA offices.

The province will also give $100 to every household that lost power for at least 72 hours due to Fiona, “to help cover the cost of spoiled food.” This will be available by the end of the week.

Damage caused by trees will likely mostly be covered by insurance or the federal disaster relief, Houston said, but there is a gap. Houston said the province will provide $250 to every household that has to pay to remove a tree from their property. That funding will also be available later this week.

The provincial government has also issued $500,000 to the Canadian Red Cross in Nova Scotia to assist those who have been displaced due to Fiona’s fury. The organization will issue $1,000 to individuals and families in need. Applications for that funding are available through the Red Cross.

Houston said an additional $100,000 will be given to Red Cross operations in Cape Breton, as well as to the Salvation Army, who are supporting communities in need.

Houston said seniors across the province have been particularly struggling. On top of the previously existing seniors care grant, the province is adding another $250 to help with storm reparations.

“An incredible amount of Nova Scotians are in shelters,” Houston said. To account for the extra demand, the province is providing $100,000 to shelters in Cape Breton and eastern N.S.

Another $100,000 hotel fund will be administered by Cape Breton Community Housing to help people in shelters who need additional temporary accommodation.

The Schools Plus program will receive $150,000 to distribute to families in form of grocery store cards and similar aid.

For income assistance clients, the province will be issuing a one-time grant of $150 to help with food and damages to personal items.

Houston also announced a large long-term measure to combat long power outages. Nova Scotia will be establishing a $2 million fund for community centres to purchase and install generators. More details on this will be released in the coming weeks.

Houston said he doesn’t have a total cost estimate for reparations from the storm damage, but the total cost of the relief programs announced will be $40 million.

“I know this won’t make everyone whole. I know it won’t be as fast as some people need,” he said.

“I know the importance of getting this in your hands as quickly as possible. Our government will do whatever it takes to make that happen.”

Damage update from officials
In a damage update earlier Monday, Jason Mew from the Nova Scotia Emergency Management office said there is still extensive damage throughout the province from the storm.

“I appreciate it’s been a rough three days for Nova Scotians. I wanted to let you know roads are being cleared of trees and the debris.”

Mew said there are many more roads to go, and asked people to stay off the roads if possible to “give the crews the space they need.”

The province is working closely with Nova Scotia Power to restore electricity. As of 1 p.m., there were still more than 180,500 customers without power, according to the outage map.

Thousands of trees are down due to the storm, many knocking down poles.

“In some neighbourhoods we have full streets where poles are on the ground,” Drover said.

“Definitely significant impact. We have lots of resources on the ground and we’re doing everything we can to safely and quickly restore power.”

Drover said this is the biggest mobilization in the history of Nova Scotia Power.

Christina Lamey, communications and information officer for the Cape Breton Regional Municipality, which was hardest hit in the province, said there are more than 200 people who are displaced because of the damage from Fiona.

“They’re sitting in shelters right now wondering what their future is,” Lamey said.

The municipality’s top priority is getting the provincial and federal governments to streamline personal assistance to the people who are displaced.

She said having the military’s support in removing debris from roads has been helpful.

Removing debris and fallen trees that are on private property is the responsibility of the homeowner. Dumping sites are opening in the CBRM, and the pickup amounts have already doubles to ten bundles.

Lamey said there are talks of support for those who don’t have the means to get contractors for extensive damage on their properties.

The federal government announced earlier that members of the Canadian Armed Forces are being deployed to help with recovery efforts across the regional. Federal Defence Minister Anita Anand said on Sunday that about 100 troops a piece were either in place or en route to Newfoundland, Nova Scotia and P.E.I.

Age is a big factor for immigratio...