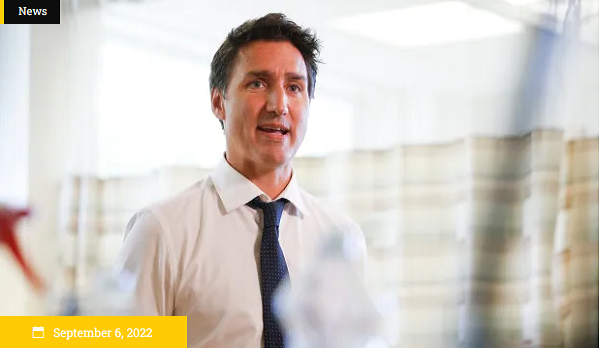 In a time of crisis, the planet is gridlocked by “colossal global dysfunction,” the head of the United Nations said Tuesday as he urged leaders to come together in a collective effort to light a beacon of hope for the world.

Secretary-General Antonio Guterres opened the leader-level debates of the 77th UN General Assembly by painting a bleak picture of escalating peril — and a world that’s paralyzed and powerless to address it.

“The international community is not ready or willing to tackle the big dramatic challenges of our age,” Guterres said.

He rattled off a laundry list of catastrophes: the war in Ukraine, the climate crisis, the economic emergency engulfing the developing world and the spread of nationalism and extremism, to name a few.

“But the reality is that we live in a world where the logic of co-operation and dialogue is the only path forward,” Guterres said.

Justin Trudeau was among the leaders seated in the Assembly Hall for the speech, the prime minister’s first event in a two-day visit to the UN where the echoes of the war in Ukraine reverberate down every corridor.

But the message isn’t about despair, said Bob Rae, Canada’s ambassador to the UN. It’s about hope.

Guterres described a ship flying the UN flag and laden with Ukrainian grain making its way through a war zone to the Horn of Africa, where millions of people are starving.

It’s part of the Black Sea Grain Initiative, a complex agreement between Ukraine and Russia, brokered with the help of Turkey, that’s finally getting long-blockaded food out of the war-ravaged region.

Providing hope in the face of disaster is what the United Nations is all about, said Rae — but it’s hard when the disasters just seem to keep coming.

“The problem we face is this incredible cascade of crises,” he said.

Trudeau met Tuesday with Chandrikapersad Santokhi, the president of Suriname and this year’s chair of Caricom, a political and economic coalition of 15 member-states throughout the Caribbean.

The rest of his UN agenda is laden with meetings on subjects close to his heart: climate change, gender equality, biodiversity initiatives and sustainable development, among others.

He took part in a roundtable with former U.S. secretary of state Hillary Clinton on the virtues of inclusive job growth, as well as a clarion call to address the online spread of violent extremism with New Zealand counterpart Jacinda Ardern and French President Emmanuel Macron.

That event — the Christchurch Call Summit, a reference to the livestreamed mosque shootings in New Zealand that killed 51 people in March 2019 — included a pledge from Trudeau of $1.9 million over three years for technology to help detect terrorist content on the internet.

But the ever-present threat posed by Russian President Vladimir Putin was never far away.

“Lots of work to do, keeping everyone together,” Trudeau said in response to a question about Ukraine as he arrived at the towering UN Headquarters on the banks of the East River.

Foreign Affairs Minister Melanie Joly acknowledged the challenge of calling for a united front from an institution famous for its own forms of gridlock and obstinance. But that doesn’t mean it’s not vital, she said.

The Ukrainian grain project “was an example that things are possible and that the UN matters. Now, there is way more to do to bring peace and stability to the world.”

Trudeau’s visit will also include work on advancing the 17 goals of the UN’s sustainable development effort, of which he is a co-chairman. Those global goals include climate action, eliminating poverty and pollution, gender equality and fostering equitable economic growth.

And he’ll be on hand for events previewing COP15 meetings on biological diversity that are scheduled to take place in Montreal in December.

On Wednesday, Trudeau will attend a pledging conference for the Global Fund to Fight AIDS, Tuberculosis and Malaria, to which Canada has pledged $4 billion since 2002.

Advocates in Canada have been urging the prime minister to commit an additional $1.2 billion for this year alone. Canada is one of the largest contributors to the Global Fund on a per-capita basis, Rae noted.

“I know the prime minister is wrestling with this question of how much more we can do,” he said.

“The pressures globally on us on every front are huge … so do we feel the pressure? Yeah, of course. But guess what? We’re used to pressure, we know how to respond to it, and we will be responding to it.”

The fund supports developing countries in limiting and treating preventable illnesses, which are in many regions leading causes of death — and once again on the rise.

Trudeau is planning to meet this week with Caribbean and other regional partners to focus on fostering sustainable growth in Haiti.

He’ll also see Joe Biden in person at an event for leaders hosted by the president and his wife — their first face-to-face encounter since the U.S. abandoned a made-in-America scheme to sell more electric vehicles.

Things you need to know on Canada&...